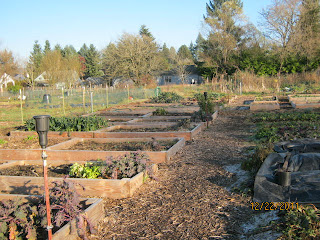 12/22/2011 Winter Solstace 2011 Garden Update. Growing our winter garden we have - Red Russian kale, Dino or Lacinto Kale, Swiss Chard, Beets, Lettuce, Turnips, Radish, Collard Greens, Cabbage, Egyptian Walking Onions, Garlic, Raddicio, Diakon Radish, Leeks. Night temperatures have been below freezing for over a week now, and frost is still on the ground, all the winter vegetables are holding up. This year we heavily mulched the beds in late fall before the freezes and that has helped the plants endure the cold weather better. Our total poundage for the year is 1694 pounds! Thats nearly 4x the poundage of last year and we were late to plant! 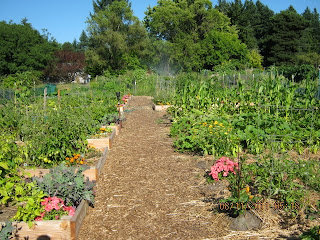 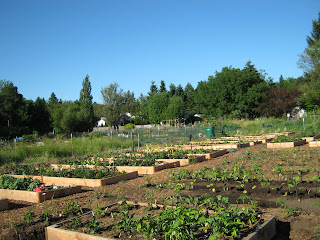 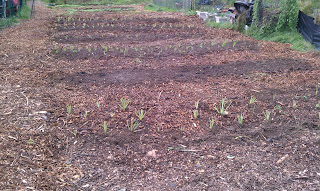 After: We transplanted Collard Greens, Raddicio, Lettuce and Leeks. 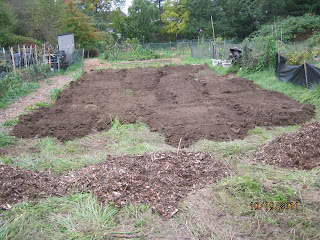 Before: lowlands, we added a few inches of soil and mulch and made a no till garden using cardboard and tree trimming chips for the paths, and mounded soil and compost.
Posted by TVGG at 2:24 PM

The garden program needs volunteers. If you would like to volunteer please email lisamcintoshfarm@gmail.com to help us with our many gardening opportunities. Saturday work parties from 10am -12pm through the summer. Save

Thanks for your generosity and help, we couldn't have done it without you!

The City of Beaverton

The McMurray's of Cananda

Stop the waste bring your harvests to the Gleaners and feed people.

It is much better to share your bounty than to let it rot on the vine, plant or tree. If you have extra harvest, please feel free to bring it to the Beaverton Resource Center on Saturdays between 12:30 -2pm for distribution.
If you have a large field that needs gleaning, give gleaners a call instead of letting it go to waste.